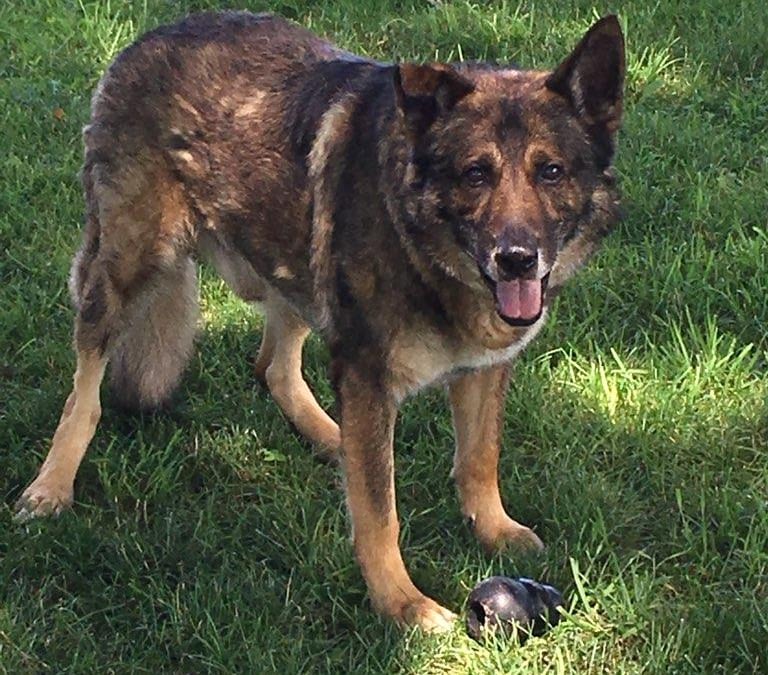 We sat on the cold concrete floor together. His brown, milky eyes looked up at me above a weathered gray muzzle. His ear was wrinkled and folded over from past hematomas and as he panted, I could see the teeth he had left were worn down to his gums. If anyone else had seen him for the first time they would have thought he was 20 years old. This was the first time I had really noticed what a decade of police work had done to his body. He was my first canine partner, Hunter, a sable German Shepherd Dog with large bone structure and a prey drive that never went away, no matter how many years had gone by. We had worked together for 7 years and together for almost 10. On that day, at his 12 years of age, in his retirement, we waited in a small beige exam room at the emergency veterinary hospital.

The ordeal began earlier in the evening. He was acting lethargic and wasn’t interested in eating food. I noticed his stomach was swollen and took him to our local vet. A quick X-ray revealed fluid in his abdomen and an abnormal looking spleen. We then went to the emergency vet where we waited for a doctor to be called in to run an ultrasound. When the doctor finally arrived, I muzzled him up and they took him into the tiny ultrasound room. He wasn’t interested in cooperating with the medical staff and they were unable to control him. When I entered the room, a calmness came over him and he allowed them to perform the ultrasound. I finally carried him back to the exam room after they finished and waited for the news, I knew would be bad.

Hunter had a large tumor on the spleen that had ruptured and he was bleeding to death. I was offered three choices – euthanasia, take him home with pain medication to ease the suffering until he passed on his own, or an expensive surgery to remove the spleen which might not be successful. Even if the surgery did work there was no guarantee how long he would last after recovery. If you’ve ever had a pet, let alone a working dog, you know there wasn’t really a choice at all. The only option was surgery, there was no way I would give up on him. After all, he had never given up on me or anyone in the community we served.

Fortunately, there was funding in place to help pay for the surgery in addition to a discount offered by the hospital for police dogs. I could focus my time on his recovery and remaining time with us, instead of how to cover such a large expense. But most handlers aren’t that lucky. Most have to cover 100% of the cost of their retired dogs. That’s where you come into the picture. You can help retired working dogs by allowing them to continue enjoying their life. After they’ve given their all to serve each and every one of us, we can give back. Please consider donating to the shadow fund, so these dogs can trade dollars for days.

If you’re wondering what happened to Hunter, he had a fantastic recovery. He was initially supposed to stay in the hospital three days for recovery. However, they released him after one day because he was doing so well. He came home and spent his last year doing and eating whatever he wanted to. 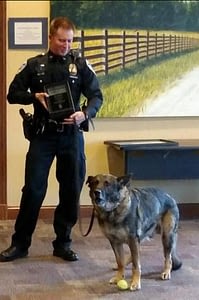