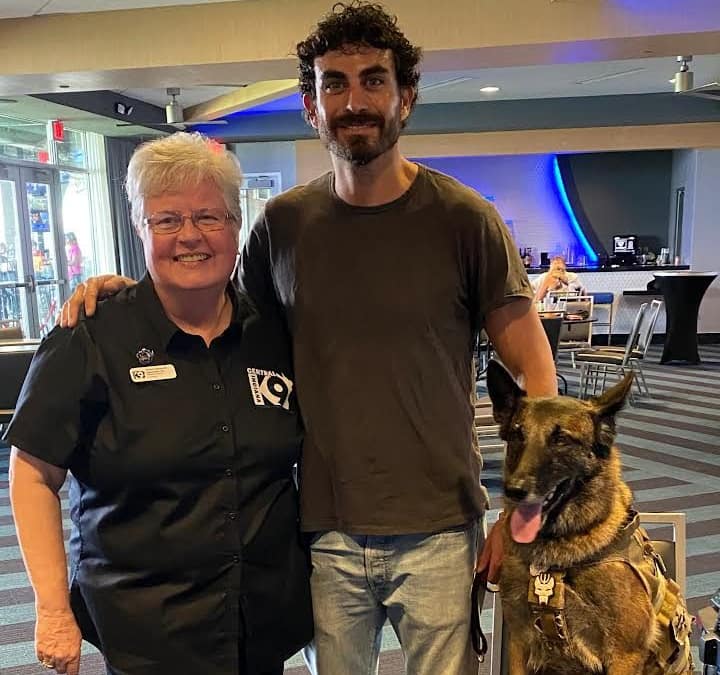 Justin Melnick, one of the actors from the TV series SEAL Team, hosted our recent fundraiser on Oct 3rd and brought his dog Dita, the “Hair Missile” along too. After all, CIK9 is all about the dogs and she was invited in addition to the other three dogs who attended.

Whether law enforcement officers or actors playing the role of a K9 handler, while they value the training they go through, the adrenaline pumps their heart rate, but the humans know that this is training and even if they fail, they will be fine in the end.

The thing about dogs is they don’t have the higher sense of reasoning as humans do.  With these high caliber working dogs, when we as trainers do our jobs correctly, to the dog a training scenario and a real-life deployment look the same. Dogs also don’t understand the concept of “pretend” or “make-believe”.  To a working dog like Dita, the “Hair Missile” every time she jumps out of a helicopter, or charges through a hail of gunfire [blanks], or is running down a fleeing terrorist [decoy] she is doing it for real and with a singular purpose in her mind; to complete each task as she was trained and to the best of her ability in hopes of getting that reward she so highly covets.

These dogs genuinely love to work and would do it all day sometimes if we would let them.  So even after multiple takes when filming a scene, for Dita each and every time, this is the real thing! 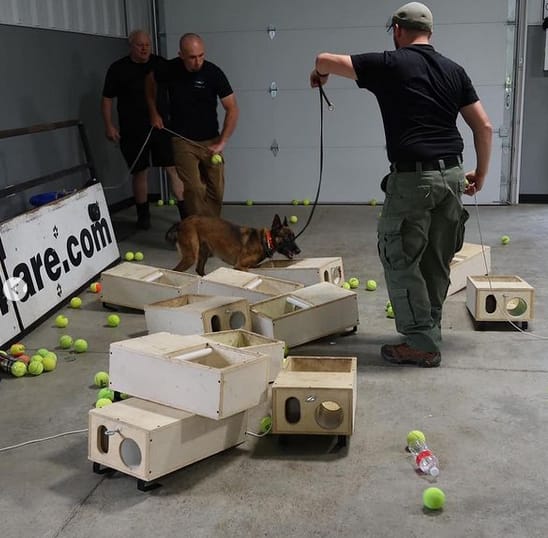 The Nose Has It

CIK9 provides quarterly training opportunities for working K9 teams across Central Indiana. We co-host with agencies, vetting professional trainers to travel to Central Indiana so that the K9 teams do not have to travel out of state.  Training with a purpose helps to ensure success in law enforcement because of the skill and not in spite of it. Central Indiana K9 Association (CIK9) wants to elevate the skill levels of every K9 Team across Indiana and beyond.

At Common Scents, our most recent training session, techniques learned showed how the K9s learn for themselves, that their eyes and ears mean nothing when it comes to earning the reward object. Training this way eliminates 95% of the cues that may cause false indications.  This training course was attended by 24 dog/handler teams representing 10 different departments.  For great images from this training and others we’ve had, please visit our Instagram page!

From NOVA:  Dogs’ sense of smell overpowers our own by orders of magnitude—it’s 10,000 to 100,000 times as acute, scientists say. “Let’s suppose they’re just 10,000 times better,” says James Walker, former director of the Sensory Research Institute at Florida State University, who, with several colleagues, came up with that jaw-dropping estimate during a rigorously designed, oft-cited study. “If you make the analogy to vision, what you and I can see at a third of a mile, a dog could see more than 3,000 miles away and still see as well.”

Everyone understands that a dog’s sense of smell is incredible, but so is their hearing and eyesight. Training is critical to ensure the use of the sense that the handler is relying on at any given time. How many times have you walked a perfectly calm dog and suddenly…. SQUIRRELL!  All dogs tend to respond to visual and audible cues which is fine unless you need them to focus on just the smell.  Can you imagine being asked to focus on a scent – when you’re surrounded by your favorite thing in the whole world – tennis balls?!

You can learn more about the amazing ability of a dog’s nose here: https://www.pbs.org/wgbh/nova/article/dogs-sense-of-smell/

The Shadow Fund – it’s all about the dogs

Within months of first starting our organization, we had raised $1,500 to ensure that we would be positioned to assist a retired K9 in need of a medical grant. While the overall idea was to ensure that the handler/owner would not suffer a financial crisis in caring for the dog, the ultimate goal is to make certain the K9 receives the care needed in spite of the cost. These funds can also be used to assist with end-of-life care which has been provided on a couple of occasions.

February 2021, we awarded our very first Shadow Fund grant to Officer Stickford on behalf of K9 Pipo.  As a working dog, Pipo served for three years with the military and then completed his career with eight years with a local Indianapolis Police Department. Pipo was diagnosed with cancer, underwent surgery and chemo which was extremely expensive. The CIK9 Board of Directors agreed that given his valiant service at both the national and local level, K9 Pipo was a good candidate and received a $2,000 grant.

On March 4th, we reviewed a second application. This one was from Officer Jarrin Franklin for retired K9 JohnE. Having served for four years with the Indiana State Police SWAT Team, JohnE was retired after losing a limb to cancer. At the young age of five years and with the success of the surgery and chemo, K9 JohnE was determined to be an excellent candidate with a long retirement ahead of him. We anticipate that the total grant will be close to $2,000.

Supporting these retired working dogs allows us to honor their years of valuable service to our communities, state, and nation. It is fitting given that they are faithful, vigilant, and selfless.

The Night You Train For

In Loving Memory of K9 Harlej, Killed in the Line of Duty

Last night, was the night as a K9 handler you train your heart for but are never truly ready.

I lost my K9 partner Harlej early this morning doing what he loved.

My memories of him are just pure joy and happiness.  He was the most dedicated, hard-working, and always in relentless pursuit of everything we did.

Nobody will ever know the time it takes for a K9 to be successful. But everyone will see the successes and we had a lot of successes together.

I think about all the men and women who played a role in making him great and great he was!

Harlej and I assisted in a lot of arrests and helped get a lot of bad people off of the streets to help keep the city of Fishers safe.

I will always remember how quiet Harlej was in my car, but at the same time remembering every time that I got out of my car and could see his glowing eyes staring at me with his ears up high. He always waited to be called and was ready to do whatever I asked of him. Harlej did it without fear. I knew every time I got him out of my car, he was going to help every time. Whether that was to find drugs during a walk around or tracking down a fleeing felon.

I know you’re chewing on some tennis balls right now buddy. Daddy loves you and I’m so glad you were my partner and in my life.

You are a REAL hero today, buddy. And you saved our lives last night.